Singers beware of mispredictions! Your voice is too small…. you’ll be lucky to sing Mozart in smaller European houses, maybe Rossini. You might work regionally in the USA, but you will never sing at the Met! Unbelievable today, but these were some early career predictions for tenor Matthew Polenzani.

“Never say never,” declares the American tenor while trying to hide a proud smile. Some say the sweetest revenge is success, and with years of singing and performing behind him, it appears this tenor with honey in his voice has let life and his talent fulfil his destiny. Success, he has achieved! 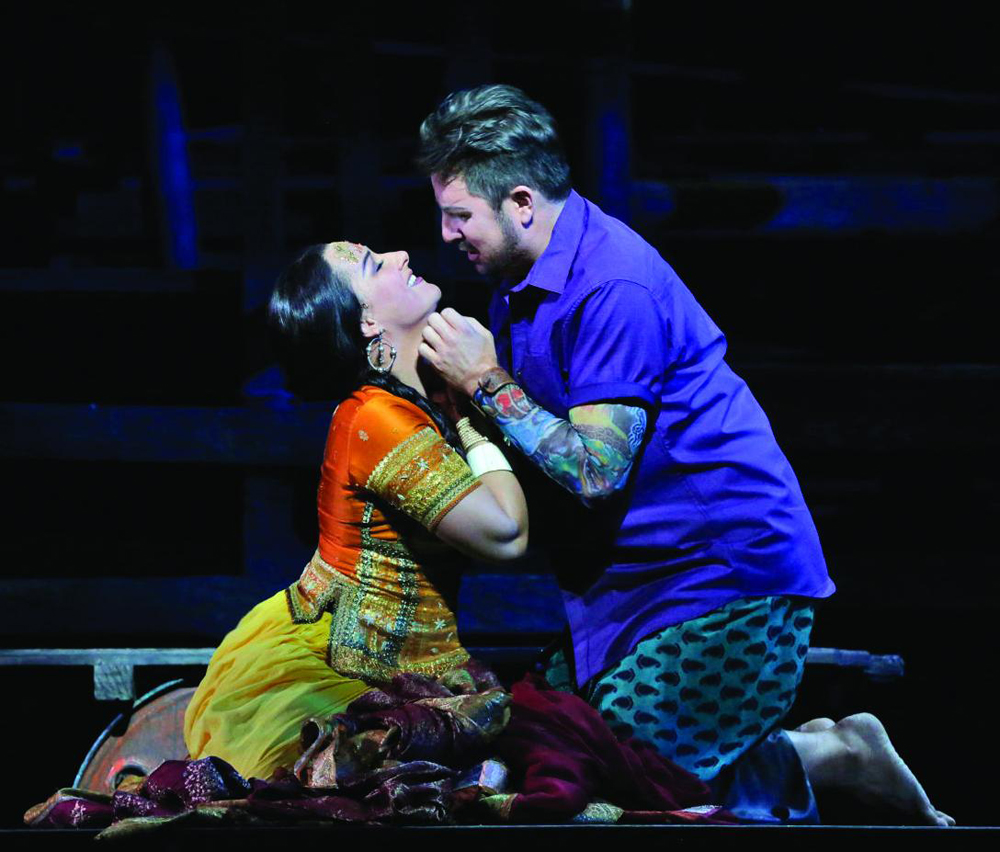 Matthew Polenzani as Nadir and Diana Damrau as Leila in Bizet’s “The Pearl Fishers”. Photo by Ken Howard/Metropolitan Opera.

To this day, he has sung more than 300 performances at the Metropolitan Opera and has also become a full-fledged opera star performing regularly at major American and international opera houses such as Teatro alla Scala, Royal Opera House, Lyric Opera of Chicago, the Bayerische Staatsoper, Seattle Opera, Vienna State Opera and San Francisco Opera.

He has played roles of various styles ranging from bel canto to contemporary works. Collaborating with pianists Julius Drake and Richard Goode, Polenzani has equally enjoyed a fruitful recital career.

Regardless of his extensive experience, rich musical path and celebrity, the tenor from a suburb of the windy city keeps his spirit of musical adventure alive and ready to set sail onto new musical horizons.

La Scena caught up with him after his successful February debut in the title role of Verdi’s Don Carlo (French version) at the Metropolitan Opera. The tenor sang alongside baritone Etienne Dupuis as Rodrigue in a cast led by conductor Yannick Nézet-Séguin.

It was no surprise that Polenzani was preparing to visit Canada and, hopefully, conquer the audiences of the Canadian Opera Company stage (COC) with his interpretation of Alfredo Germont in Verdi’s La traviata.

“Alfredo is a part that I really enjoy,” he says, “I am also, of course, very excited about my debut at the COC. When I am asked to sing in Traviata, I always like to inquire about the other singers in the cast. I have been told great things about the soprano, Ms. (Amina) Edris, singing the title role and with whom I have never sung before.”

He looks forward to meeting the other members of the cast as well as having the opportunity to spend more time with old friend, baritone Russell Braun. Being based in New York, he considers singing with the COC a logical move for him; it has positive quirks as well on a more personal level as the relatively short distance will allow his wife and four children to accompany him. This performance could possibly be the beginning of a longer collaboration with the Canadian opera house.

Polenzani has more than 500 performances under his belt and is approaching what is called his golden years. Despite this fact, his voice has maintained the same youthfulness and vibrancy that it displayed in the 1990s, when he made his Metropolitan Opera debut in Mussorgsky’s Boris Godunov. How does he achieve this? 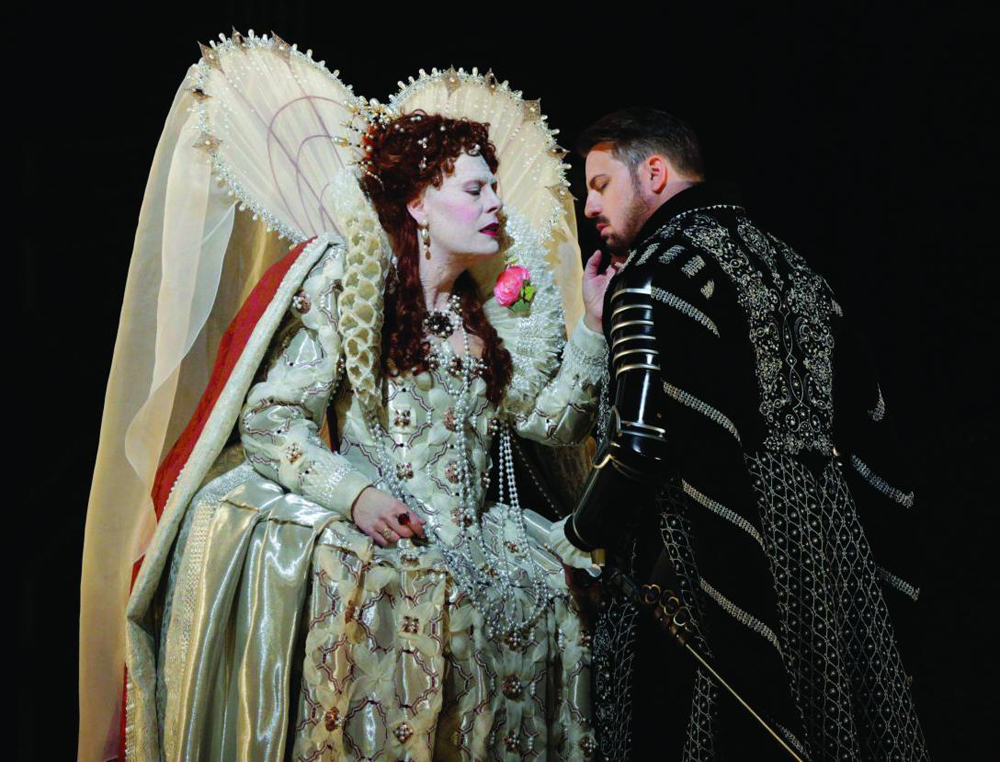 Sondra Radvanovsky as Elisabetta and Matthew Polenzani in the title role of Donizetti’s Roberto Devereux. Photo by Ken Howard/Metropolitan Opera.

His response is quick and straightforward: “It’s work!” The tenor still considers himself to be a voice student, takes private singing lessons when his schedule allows which he records and listens to on his pocket recorder. His wife, an operatic mezzo-soprano, knows his voice inside out and gives him feedback whenever needed. “Just like the human body, the voice is always in constant change and growing,” he says. “(As singers) we have to be on our toes, always trying to adapt.” He adds: “I have also always been careful to try to incorporate some Mozart in my schedule, even now that it is more difficult to be cast in roles such as Ferrando or Ottavio, I still have some Taminos in my future and hopefully will keep getting the more mature Mozart gigs such as Idomeneo and Clemenza di Tito.”

Not only has Polenzani been able to keep his voice fresh and strong, but over the last decade, his instrument has become larger, allowing him to venture into more demanding roles less accessible at the beginning of his career.

“In the last eight years, people have been telling me that my voice is five times bigger than it was. I can’t hear it because (the sound) is out in the hall, but I have been feeling comfortable in the more mature roles than before.”

His upcoming engagements will showcase some of that newly acquired power. In July he will make his debut as Cavaradossi in Puccini’s Tosca, at the Savonlinna Opera Festival in Finland. This role requires both lyricism for the aria “Recondita armonia” and more heroic vocal fireworks for his “Vittoria” in Act II.

Polenzani points out (just like in Tosca) that a combination of lyrical and heavier repertoire has been responsible for his continuous vocal growth. He believes that performing contrasting works keeps the mind alert and the voice flexible. He carefully plans his performance schedule—ensuring, when possible, to alternate between new heavier roles such as Don Carlo and lighter roles such as Alfredo Germont.

Another key element to his growing ability to sing heavier, more dramatic, roles resides in his knowledge and respect of his vocal instrument and its limits and to obeying the golden rule to never over-sing. “I know I can produce enough sound to get over the orchestra,” he says, “but I’m not going to give you a Domingo, Schicoff or Corelli type of a primal, huge sound. When growing up, I revered those guys, but I understand that I’m a different singer—more in the vein of a tenor such as Nicolai Gedda, who by the way, has also enjoyed success in singing dramatic parts.”

All in all, Polenzani is enthusiastic for the future. “Who knows? If things continue like this, I might get to take a chance at Othello!” he says. “My agent assures me it will happen, but who knows. I just follow the voice wherever it takes me.”