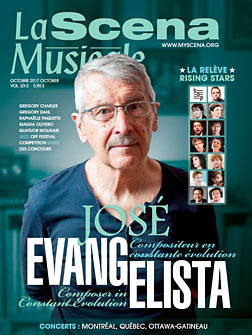 José Evangelista is a composer who perfectly represents the cultural diversity and historical background of Canada and Montreal. In the early 1970s Evangelista was, like many Spaniards of his generation, in search of a better quality of life and trying to escape the Spanish dictatorship of Francisco Franco. 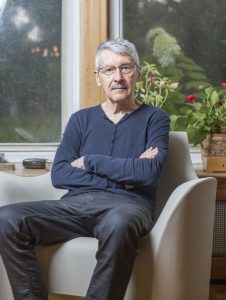 Coming to Canada, he says, was not a straight line. “It was like this,” as he mimics a crooked bumpy road. “It was a combination of circumstances because I am an ex-scientist. I have a Masters in ­nuclear physics. I was given a bursary to go study in Geneva at the European Organization for Nuclear Research, CERN, a large centre for scientific research.”

Back home in Spain, Franco’s long dictatorship was still going strong, so Evangelista and his wife decided to Ottawa.

Once settled in Canada, and after gaining economic and political stability, he reflected on his life path and career. ”At one point I sat down and said to myself: I’m almost 30 years old, its time to determine my career, I should goback to music.”  His first idea was to become a music teacher. After all, in the past he had studied at Valencia’s Conservatory, where he had won first prize in music composition in 1967. He studied there with his father-in-law, Vicente Asencio, a well-known composer of guitar and piano works.

Wishing to renew his music studies, Evangelista enrolled in a ­Masters program in music at the University of Montreal, where he studied under the guidance of André Prévost. He went on to McGill University to complete a Doctorate under Bruce Mather. Soon enough his compositions began to win favourable notice and he accumulated several important awards. As well, commissions came in from important ensembles. Now, decades later, José Evangelista is recognized as both an accomplished composer and teacher.

Evangelista doesn’t have a systematic method for composing. Instead, he guides himself by several philosophical principles: constant introspection, a continuous search for artistic inspiration, and consciously not repeating something done in the past.

“What is important is to be coherent. Instead of writing tonal music just because it sounds nice, we should write with a language that seems to be familiar to the listener but in reality, when we analyze the score, is not. We have to be careful not to fall into the banality of academism, by which I mean to work continuously with things that already exist, things that don’t ask for any sort of artistic reflection. It’s a very prudent way of composing!”

Throughout the main body of the composer’s work we may identify as a common feature the use of a heterophonic texture, characterized by simultaneous variations of a single melodic line. This technique may also be viewed as an advanced kind of monophony, in which there is one main and long melodic line acting as a sort of cantus firmus that is played at the same time in different voices, but with ­multiple variations to create an illusion of harmony. 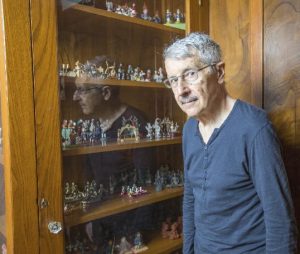 “At one point, when I was young, I was surprised to realize that what I was listening to was in reality some sort of super melody that existed virtually, so I could have two types of different readings of the musical excerpt: One way is to view it as juxtaposed variants of the melody and another is to interpret them as being melodies that are totally different from each other. I love that kind of ambiguity!”

He also comments on the use of cantus firmus. “It’s an ancient composition technique that comes from the Middle Ages and the ­beginning of the Renaissance. It’s the idea that a musical piece is based on one melody or common tone that forms the base of the whole musical composition. It’s a very useful tool because it’s universal. It can’t be associated with any particular ­aesthetic, so one can apply it to any genre, from rock to romantic or baroque.”

Currently he has continued to expand on the idea of ambiguity and heterophony. He cites his Accelerando as an example of how he has been developing those ideas. This piece was commissioned and ­performed last year by the Montreal Symphony Orchestra (MSO) to commemorate the 50th anniversary of Montreal’s metro system.

“I continued looking for new nuances. Then it occurred to me that I could do a piece in which I could use a very long melody of about 70 or more notes that in reality, when we do a vertical reading on it, is at once both melodic and harmonic … I had really good models. Alexander Scriabin, for example, used to say that his melody is harmony and his harmony is melody. In his more advanced pieces one can observe that a lot of passages can be read both vertically and horizontally.”

While exploring Evangelista’s repertoire, we quickly notice the use of an exotic palette of colours. In fact, many of his pieces are inspired by the music of Indonesia, where he spent several summers studying ­Javanese Gamelan and Burmese piano. “I consider it as the perfect music. On one side it’s very sophisticated and can satisfy the intellect, and on the other side it’s very direct. When one hears it, one has an ­immediate reaction, without knowing why.”

Over the years his passion for Gamelan expanded, and in 1986 he founded the Atelier de Musique Gamelan at the University of Montreal.

He explains how it all began: “The idea of bringing a Gamelan group to Montreal was very attractive to me, because I considered it would be a great thing for the students. But the university had no money, so we made an arrangement with the Indonesian government. We brought them here to promote their culture in an international arts fare. They brought an important number of musicians and instruments. When they left, they donated all of the latter as part of the exchange.” He goes on to explain that the Indonesian musicians left two beautiful sets of Gamelan metallophones, which he immediately used to open the workshop.

Since then, the Gamelan Workshop has become a very popular course at the University of Montreal. “Some students even go to India to specialize and get more knowledge.” He also explains one of the most important components of learning music in India, an element that in his opinion is not well developed in the western music educational world: memorization. “In the Gamelan tradition, being able to play by heart is always required. In fact when I started studying it, I soon realized that my capacity for memorizing grew considerably, much more than I ever thought possible. It’s an oral tradition. There is nothing on paper, so one is forced to learn by heart.”

One of Evangelista’s most acclaimed compositions is Clos de vie. ­Commissioned by the Société de musique contemporaine du Québec (SMCQ) and conducted by Serge Garant in November 1983, this work received a commendation from the international panel of composers of UNESCO in 1984. He dedicated this piece in memory of his friend and colleague Claude Vivier, who died tragically in 1983 at age of 34.

The two composers were very close comrades. In 1978, for ­example, they co-founded Événements du neuf, an organization devoted to promoting the many trends of contemporary music.

Evangelista confides in a mellow yet emotional voice, “Clos de vie is one piece that I wrote in very painful circumstances. I had lost my friend, Claude Vivier. We had been working together a lot in those years. That piece brought out a sense of nostalgia and profound ­sadness that had accumulated since his death.” He then explains, “The title is a paraphrase of the French noun ‘vivier’ (reservoir) and it also sounds like ‘claude vit’ (Claude lives).”

Musicwise, the piece exploits a monodic texture. It is based on one cyclic melody. “Its four sections are different versions of an orchestral unison,” explains Evangelista. “Therefore, there are no chords or real counterpoint. The instruments are very often treated in a way that it creates ambiguities between their timbres. The piece closes on a quote from Lonely Child, a Vivier work

He also explains how paradoxical it was for him to have a piece ­inspired by sadness and frustration be performed by the SMCQ ­ensemble, a group that is characteristically soft and sweet.

This year the Société de musique contemporaine du Québec’s (SMCQ) 6th edition of their Homage Series will be dedicated to Evangelista. This biennial concert series presents works from a Quebec composer played by different Canadian and international performers throughout Canada. Concerts by ensembles such as Quasar and the Nouvelle ensemble moderne (NEM) are already booked for the 2017–18 season to celebrate this composer’s music. www.smqc.qc.ca