Saturday, September 1 was one of the busiest journeys of the five-day Festival with 6 indoor concerts, a Masterclass with Russian accordionist Roman Jbanov,  a Trad Quebecois dance event and free concerts held all over the town in different outdoor stages and restaurants. I also wanted to visit the Accordion Museum at the historical Manoir et four a pain Couillard and the photographic exhibition by Julien Simard which documented 30 years of the festival’s history.

My first order of business was to meet with accordion prodigy Andrea Di Giacomo. The 22-year-old left the audience in awe at the Opening night concert with his dramatic and highly skilled performance.

We met at Café Breton on St-Jean-Baptiste Street where the locals promised a good espresso. On the way there, a passing lady recognized him and started screaming as if she had seen the Messiah:  “c’est lui!, c’est lui!. C’est le gars qui jouait hiers l’accordeon!”  Andrea timidly shrugged his shoulders and responded by nodding nonchalantly. To which, she insisted: “Bravo, Bravo!!” Andrea looked as if he wanted to vanish, he is not the exuberant personality that one expects to meet after watching him perform.  On stage, he looks imposing and confident, in person his gestures are subtle, his voice is high pitched and barely audible, and is also a man of few words, responding to all my questions with one or two-word sentences.

After interviewing Andrea, the next logical step was to stroll along and get immerse in the ambiance. The street was crowded with food vendors, there was live music in every restaurant terrace and in outdoor stages going, creating a sort of cacophonic folk symphony.

Following a pint of beer accompanied by trad live music, it was time to get in contact with nature. A 15 minutes walk and one can find the Riviere-du-Sud and the St. Laurence River.  Not much to do there culturally wise, however, there is nothing more relaxing than breathing the fresh air pouring out from the St Lawrence and appreciating the view. The soundtrack this time was the quacking chants of ducks.

Next, I had planned to visit the Accordion Museum. However I found out too late that it closes at 5 pm. In my opinion, it would have been logical to leave it open till later hours during the festival’s celebrations .

That night, I decided to head up to the École secondaire Louis-Jacques-Casault where an International Concert and a Traditional Quebec dance event had been scheduled.  It was a tough decision since the concert series Accordeon Passion was being performed simultaneously at the Centre des migrations.

Finish duet Markku Lepistö (diatonic Accordeon) and Petri Hakala (mandolin) opened the concert. These two veterans have been working together for about 20 years resulting in the sort of telepathic music complicity achieved only by the greats.

One of their main musical traits was the presence of complex time signatures such as 5/8 and 7/16, which are characteristic of Balkan music. The melancholic nature of the first piece in the set of three polkas that they performed went straight to the heart. The listener was also treated to a CD quality sound. The mix of the two instruments was perfect, the mandolin reverberated in a sweet and ample way as if it was the soundtrack of a dream. The piece entitled Diatonic Concerto was also a highlight. The fasted-paced tune was written 20 years ago by the accordionist and it exemplifies some of their jazz and bluegrass influences. 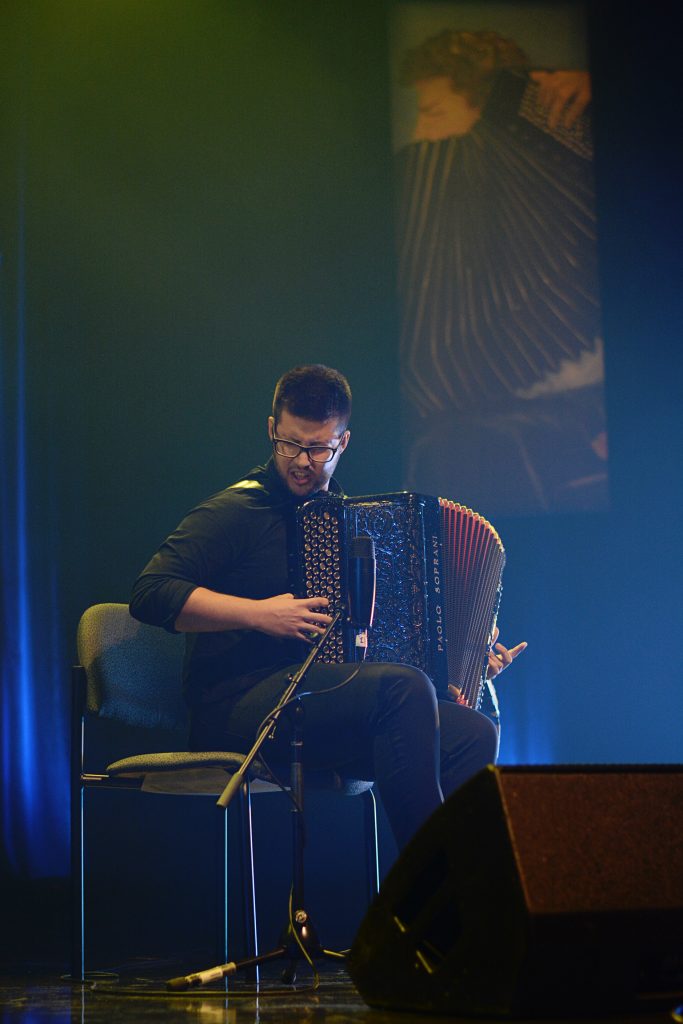 Next was Italian Andrea Di Giacomo’s solo performance, the second in two consecutive nights at the same stage. Once more, he astounded the public with his technical prowess. However, it was disappointing that he decided to repeat almost note by note the first half of the previous night’s show. In the second half he performed mostly what he described as Tangos with “Jazz Contamination.” They featured a high level of difficulty, but at that point the performance was lacking original material or maybe a second instrument.

The show ended with Canadian Duo of Timi Turmel (accordion) and Erin Leahy (piano). Their repertoire consisted of a medley of traditional Canadian and Irish repertoire, pieces such as “Shandon Bell.”

In the intermission, I was able to run and take a sneak peak of the traditional dance event. The dance was the “set carre.” At the beginning of the evening the public is organized into dancing groups, most commonly composed of four people. On the stage, there was a duo of musicians and a host or calleur who is in charge of calling the dancing moves to be executed.  Historically, due to the North American origins of the dance, the “calls” were exclusively given in English. It was only until the 1930’s when the French language was utilized with more frequency.

After the show we had an invitation for a “trad Jam,” a private event open only to the musicians and the staff of the Carrefour. At the end of the night 20 accordionist, 5 violins, a harmonica, a Cabrette (instrument family of the bagpipes) and 3 acoustic guitars had come to the event. Together, they improvised to traditional folk repertoire.  In my opinion this event really captured the essence of most folk music: to socialize, dance and have a good time. I wish the organizers of the Carrefour could devise a way to present a similar show to the public in the future. Furthermore, since at its origins most of this type music was created to dance, some of the indoor concerts were better suited for the outdoors.

I leave the town of Montmagny and it’s Carrefour mondial de l’accordéon on a rainy Sunday morning while a catchy gigue from the nigh before goes plays in loops through my mind. It was a fun and busy two days stay, my only regret is to not have been able to see more of the concerts and activities.